Not sure how you want to propose? These unique wedding proposal ideas may have you inspired to do a little globetrotting for your one and only!

There’s a lot of fantastic proposal ideas floating around the World Wide Web, which may make your job a little tougher. On the plus side, there’s a lot of unique wedding proposal ideas that will allow you to get some traveling done before you take a knee and declare your love. Here’s just a few of the exciting ideas I came across while browsing proposals this week!

We all love seeing the world, just about as much as we love the Proclaimers mega hit “500 Miles,” right? Well this clever grad combined the two to make the ultimate marriage proposal for his partner! Jack Hyer met the love his life in college and spent an entire 4 years working on their marriage proposal!

The college student took to the skies to visit 28 countries in a total of 4 years! Lucky! In each country he would capture himself singing along to the song, which he later strung together and presented to his bride-to-be as his “graduation slide show”!

After the video concluded, Jack wooed his partner even more with an adorable speech just before taking a knee! After a lot of sobbing and cheers, the bride-to-be, of course, said yes!

What a way to start your life with someone! I really loved how Jack knew what he wanted from the very first date and put his plan into motion. The cool thing about this is his partner knows he was thinking of her every time he was abroad. Not to mention, they’ll always have Jack’s “graduation slide show” to look back on! 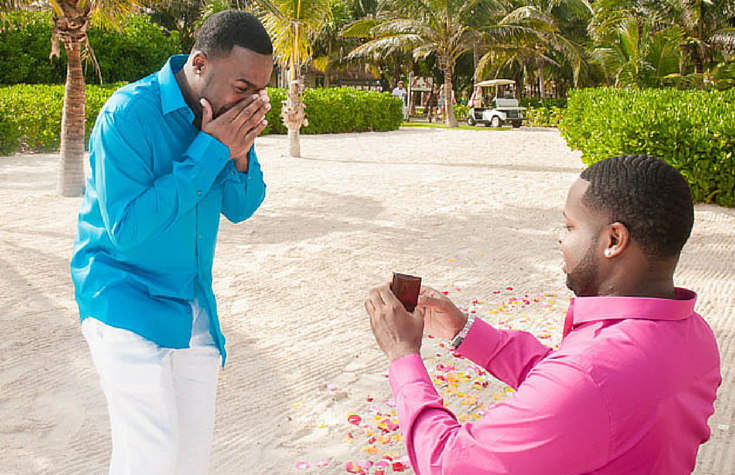 For the past four years, Jeff and Jeremiah have enjoyed their annual trips to Mexico. However, this year was going to be a bit different!

About 6 months before their big trip, Jeff sent a letter to their home stating they’d been selected for a free photoshoot. Excited about the win, Jeremiah didn’t give it any extra thought! Nor did he think twice about all of the money Jeff was putting back for his 30th birthday trip to Australia.

In reality, Jeff was using the money to hire a crew to film and photograph his epic proposal! Dressed adorably in matching white pants and button up shirts, the two left for their beach photoshoot. Once there, Jeff took a knee and surprised Jeremiah with a fabulous diamond engagement band!

When I saw this proposal on Equally Wed, I knew I had to share it! These guys are too cute together and their photographer did such an amazing job. Of course, you have to give Jeff props for creating a cover-up for the photo session in the first place! I loved the fun shots of the two jumping on the beach as well as the perfectly timed photo of Jeremiah’s reaction!

Photograph supplied by the bride.

Gemma had always wanted to pay a visit to the iconic Betty’s Tea Rooms in Harrogate, England. So, for her birthday her boyfriend Nick booked the trip. The alarm bells didn’t ring for Gemma until that night when the two of them went out for curry.

Gemma left the table for a moment and when she returned she couldn’t figure out what was bothering Nick. He passed her a box with a stunning ring in it though, but couldn’t seem to muster the words! Gemma was so excited she couldn’t help but razz him for not verbally asking, which is really just too adorable for words.

My favorite part of this proposal was Nick letting Gemma choose the restaurant. I mean, had he not let Gemma pick, curry would have been such an unusual choice which makes the story stand out. I also loved that Nick proposed right away, which probably made the rest of their trip even better. B.Loved Blog really made a great choice by selecting this story to feature in their eclectic bride journal! 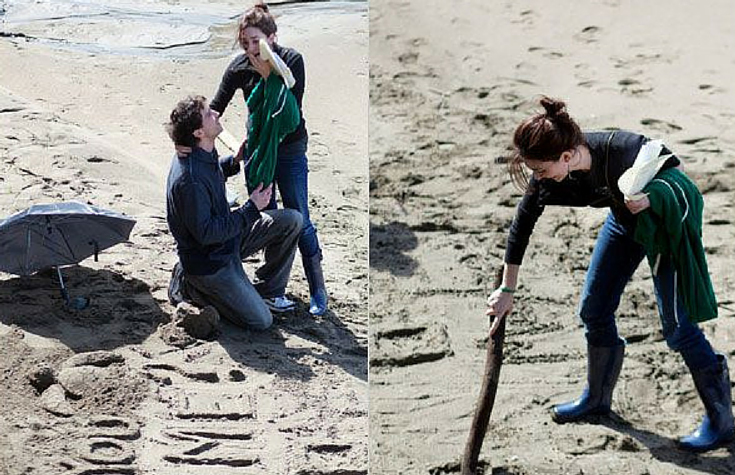 While visiting San Francisco, Mark decided to give his long term girlfriend, Shelly, the trip of a lifetime. Using the help of friends, Mark created a cute little scavenger hunt that led Shelly along China Beach. At the end of the hunt, she came across Mark’s marriage proposal written in the sand. The topper was she had to check a yes or no box! I think you can probably guess, she checked the YES!

I really loved this proposal when I saw it on Artfully Wed. I mean, the check box alone was totally adorable and you can’t help but awe over their photographs. Mark really took the proposal up a notch by asking Anna Wu Photography to sneak some photos while Mark was proposing. Afterwards, the lovebirds posed for some more engagement photos on the beach! 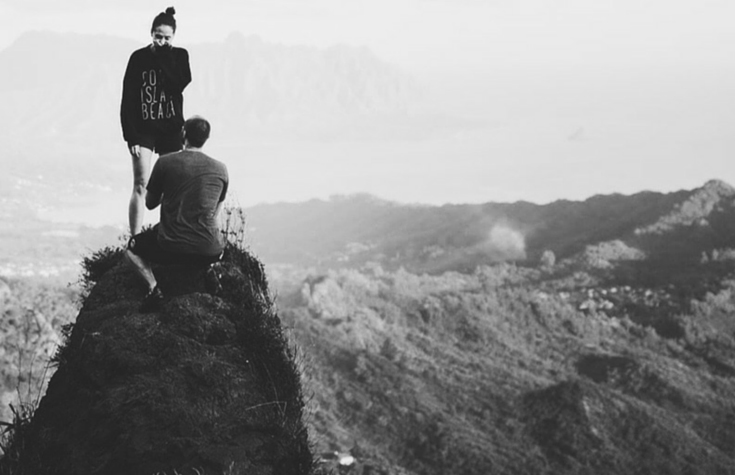 Andrew and Tiffany had known one another for years, so when given the chance to head to Hawaii to help with a documentary, Tiffany couldn’t say no. She also didn’t think twice when Andrew suggested they take a hike on a trail that was pretty much off limits. With a couple of friends they tackled the Haiku Stairs and the lovebirds posed for a picture on the very top! Then, Andrew took to his knee for one final photo that would change their relationship forever!

I couldn’t help but fall in love with this romantic proposal when I read it on How He Asked! Apart from all of the clever tricks Andrew had to pull off to get the proposal to happen (Namely, working with Tiffany’s boss and working his magic on a guard) which can all be discovered on the blog, it was actually very cool that he looks like he’s popping the question while the two of them are, quite literally, on top of the world! 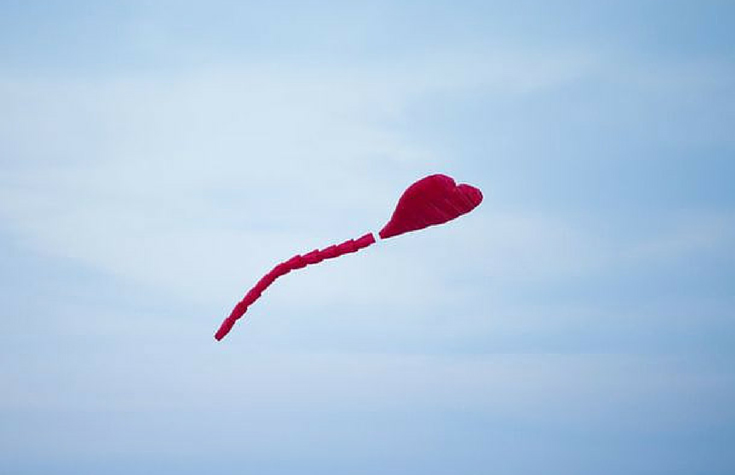 Woody had planned on proposing to the love his life on his birthday, but fate stepped in and made sure that Mattye’s ring was ready to go for their upcoming trip to St. Simon’s Island on the coast of Georgia. The couple met up with two friends, Brent and Sarah DeShaw, who just so happened to be photographers (wink, wink)! As Mattye and Woody took off to explore on their own, Woody took a knee while their friends began to capture every beautiful moment!

I really love stories that bring in friends to help out with such a special moment. Since Mattye already knew the photographers it didn’t seem unusual at all that they’d be following with cameras. Very clever. When I read this on Style Me Pretty, I fell in love with the couple’s story and how dedicated they were to one another. Of course, that heart-shaped kite on the beach was too cute for words and really added to the engagement photographs! 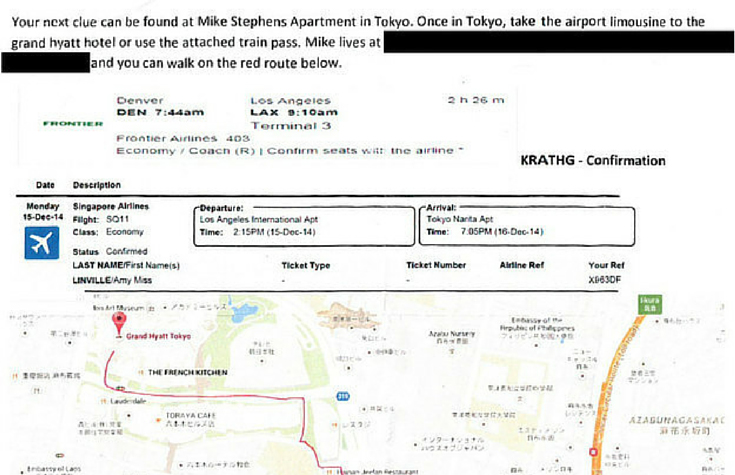 Adventure really swept this woman off her feet.

This unique wedding proposal idea will really have you in tears! Brett and Amy have traveled a lot since they started dating, which is why Brett decided to incorporate it into his mega wedding proposal! Amy’s first clues started in her hometown in Colorado, but she soon found herself traveling throughout Japan. Her last clue, in San Sebastian, told her to take a hike where she ran into Brett who had brought a bottle of wine and a very shiny ring!

There’s so much to love about this proposal, I don’t know where to start. Who doesn’t want to travel around the world, catch up with old friends and end the entire trip on a very romantic note! Even when things didn’t work out, Brett used some quick thinking to ensure his bride-to-be had no idea what was going on! I especially loved how he tricked her into thinking he was celebrating the holidays with family, while he was actually preparing to propose to her.

There’s a lot of great ideas out there, but I really hope you enjoyed these. Perhaps, the unique wedding proposal ideas will inspire you to plan something special for the love of your life. If not, I hope they brought a smile to your face and made you want to hug your partner a little harder tonight!

Your information will *never* be shared or sold to a 3rd party.
{"enable-exit-intent-popup":"true","cookie-duration":14,"popup-selector":"#popup-box-sxzw-2","popup-class":"popupally-opened-sxzw-2","cookie-name":"popupally-cookie-2","close-trigger":".popup-click-close-trigger-2"}
Don't you want to read more content just like this? Sign up for our FREE newsletter!

Your information will *never* be shared or sold to a 3rd party.